About Falmouth Harbour Marina and Antigua 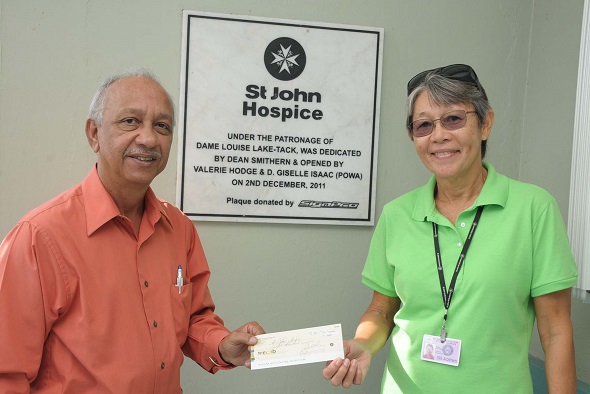 Falmouth Harbour Marina has become the latest company to donate to the St. John Hospice.

However, as the Company’s General Manager, Bobby Reis explained, this is not their first donation.

“Falmouth Harbour Marina is the sponsor of the Lord Nelson Pursuit yacht race which takes place on Old Year’s Day annually. When we were approached to sponsor that Race in 2014 we were told that all sponsorship funds raised would be donated to the Hospice. So we made the first donation for Old Year’s Day 2014 and this $5,000 donation today is in fact for the last Old Year’s Day race.

Reis continued; “ In the past we did this with no fanfare but we have come forward this year because we are also one of the major sponsors of Team Wadadli participating in the Talisker Whisky Atlantic Challenge and since they are rowing to raise money for the Hospice, we thought this would be a great opportunity to appeal for more support.”

Falmouth Harbour Marina is the country’s premier mega yacht marina and is owned by all indigenous Antiguans. It began operations in 1997.